GET INSIDE THE UNIVERSE OF GAME OF THRONES® 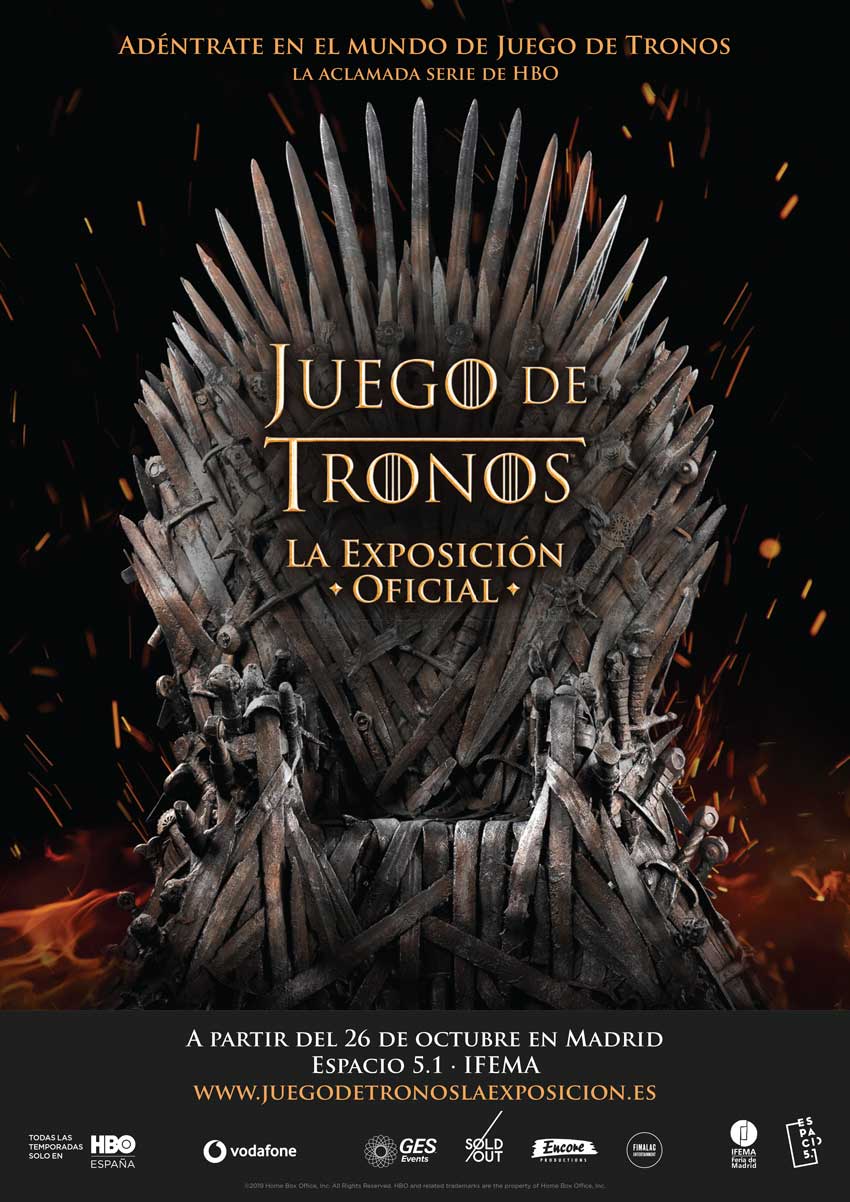 Madrid, 12 September, 2019 - HBO® Licensing & Retail and GES Events in partnership with the local promoters Sold Out & Encore Productions, announced today that GAME OF THRONES: THE TOURING EXHIBITION will open at Espacio 5.1 in IFEMA-Feria de Madrid on October 26th 2019, for a limited run.

The new interactive experience, with more than 1.000m2, inspired by the hit HBO series GAME OF THRONES®, will offer the visitors an up-close and personal look at authentic props, costumes and set decorations from the groundbreaking show.  GAME OF THRONES has become the most awarded TV show in history with 47 Emmy® Awards. Tickets to this blockbuster event are available from today at www.juegodetronoslaexposicion.es and www.gameofthronesexhibition.com

GAME OF THRONES: THE TOURING EXHIBITION will allow fans worldwide to experience the craftsmanship and artistry of the GAME OF THRONES production up close in the largest public display in Spain to date. Featuring a unique mix of immersive environments, interactives, and multimedia content, visitors will experience the lands of Westeros and Essos and relive some of the most emblematic moments in the fighting for the Iron Throne.

“We couldn’t be more excited to bring JUEGO DE TRONOS: LA EXPOSICIÓN OFICIAL to Madrid this October,” said Jeff Peters, vice president of licensing and retail at HBO. “After the overwhelmingly positive global response since its premiere, we are thrilled to share the experience with our Madrid JUEGO DE TRONOS fans.”

“The next stop for GAME OF THRONES: THE TOURING EXHIBITION in Madrid promises to be exciting,” said Dan Hilbert, senior vice president of GES Events. “To see, in one place, the beautiful, hand-crafted work of the talented artisans, designers, and craftsmen who bring the world of Westeros to life will be thrilling, and we are so happy to bring it to Madrid this October.”

“It’s a great honor for Sold Out to partner with Encore, GES Events and HBO to bring to Madrid the official exhibition based on the successful show GAME OF THRONES,” says Rafael Giménez, Sold Out director, Spanish promoters. “Sold Out’s aim is to keep promoting international first level exhibitions in Espacio 5.1 and we’re sure GAME OF THRONES: THE TOURING EXHIBITION won’t let anyone down.”

“It is a great pleasure and an honor to be part of this new adventure,” said Pascal Bernardin of Encore Productions.  “At last this iconic series has been turned into a live exhibition, Madrid is impatiently awaiting its arrival.”

The arrival of GAME OF THRONES: THE TOURING EXHIBITION is a new opportunity for Westeros fans to re-watch all seasons of the worldwide acclaimed show on Vodafone.

Hours of Operation
From October 26th, 2019
Tuesdays to Sundays from 10:00 to 21:30. Last entry slot one hour and half before closing time.
Closed Mondays, except for Bank Holidays and vacation periods.

In November 2014 Encore Productions joined the Fimalac Entertainement Group to develop the exhibitions market in France and Europe: "The Art of the Brick” in Paris and Zurich, “Harry Potter” in Brussels (in partnership with Firestarter), in Madrid in 2017 and 2018 (in partnership with Sold Out) and in Milan in May 2018 (in partnership with Di&Gi and Sold Out), and Jurassic World the Exhibition at the Cité du Cinéma in Paris / Saint Denis from April 14th  to September 2nd 2018. Encore is very happy to present the iconic exhibition GAME OF THRONES: THE TOURING EXHIBITION at Paris Expo / Porte de Versailles in June 2018.

Since 2017, Sold Out has presented exhibitions such as David Bowie Is, Björk Digital , Banksy, ¿Genius or Vandal?, The Pink Floyd Exhibition. Their Mortal Remains, Jurassic World: The Exhibition or Harry Potter ™: The Exhibition in Madrid, becoming one of the most visited exhibitions in Spain with more than 460,000 visitors. As of 2018, Sold Out manages Espacio 5.1 at IFEMA, the new exhibition venue in Madrid. www.soldout.es

Since it opened its doors in 2018, Espacio 5.1 has hosted exhibitions as Jurassic World: The Exhibition, Banksy: Genius or Vandal, or The Pink Floyd Exhibition. Their Mortal Remains, receiving more than 350,000 visitors.

GES is delighted to announce that for the 11th year in a row, the GES National Servicenter® achieved J.D. P...