Valencia, February 19th, 2019 – Exciting news for Wizarding World fans! Tickets for Harry Potter: The Exhibition in Valencia are now on sale at www.harrypotterexhibition.es. Due to popular demand, the exhibition is returning to Spain this spring, offering fans another chance to see some of the iconic sets and props from the Harry Potter films. The exhibition will be hosted in the Museu de Les Ciènces at the stunning Ciutat de les Arts i les Ciències complex in Valencia, for a limited time, opening April 13. 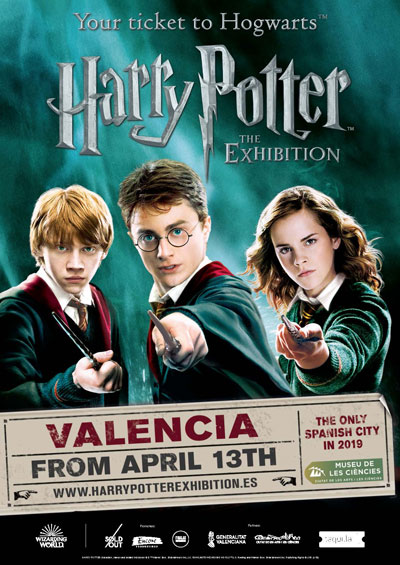 Since its highly successful premiere at the Museum of Science and Industry in Chicago in 2009, the exhibition has been presented in a variety of major cultural and entertainment institutions and museums in cities around the world including Boston, Toronto, Seattle, New York, Sydney, Singapore, Tokyo, Edmonton, Sweden, Cologne, Paris, Shanghai, Brussels, Madrid, Amsterdam, Milan and Berlin welcoming more than 5 million visitors.

“We are pleased to continue to be part of the European tour of Harry Potter: The Exhibition by bringing it to Valencia. After seeing how happy the fans were in Madrid, we knew we had to bring it back to Spain,” says Pascal Bernardin of Encore.

“We are thrilled to bring the exhibition back to Spain. We are sure of the magnificent reception in Valencia,” added Rafael Giménez of Sold Out.

“We are excited that the twentieth tour stop of Harry Potter: The Exhibition will be in the beautiful city of Valencia,” said Robin Stapley, Vice President Design and Creative, GES Events. “The exhibition was a great success in Madrid and we hope fans new and old will have a chance to visit this exhibition and relive their favorite moments from the films.”