in Madrid to celebrate the opening of the exhibition

Tickets are on sale at www.juegodetronoslaexposicion.es 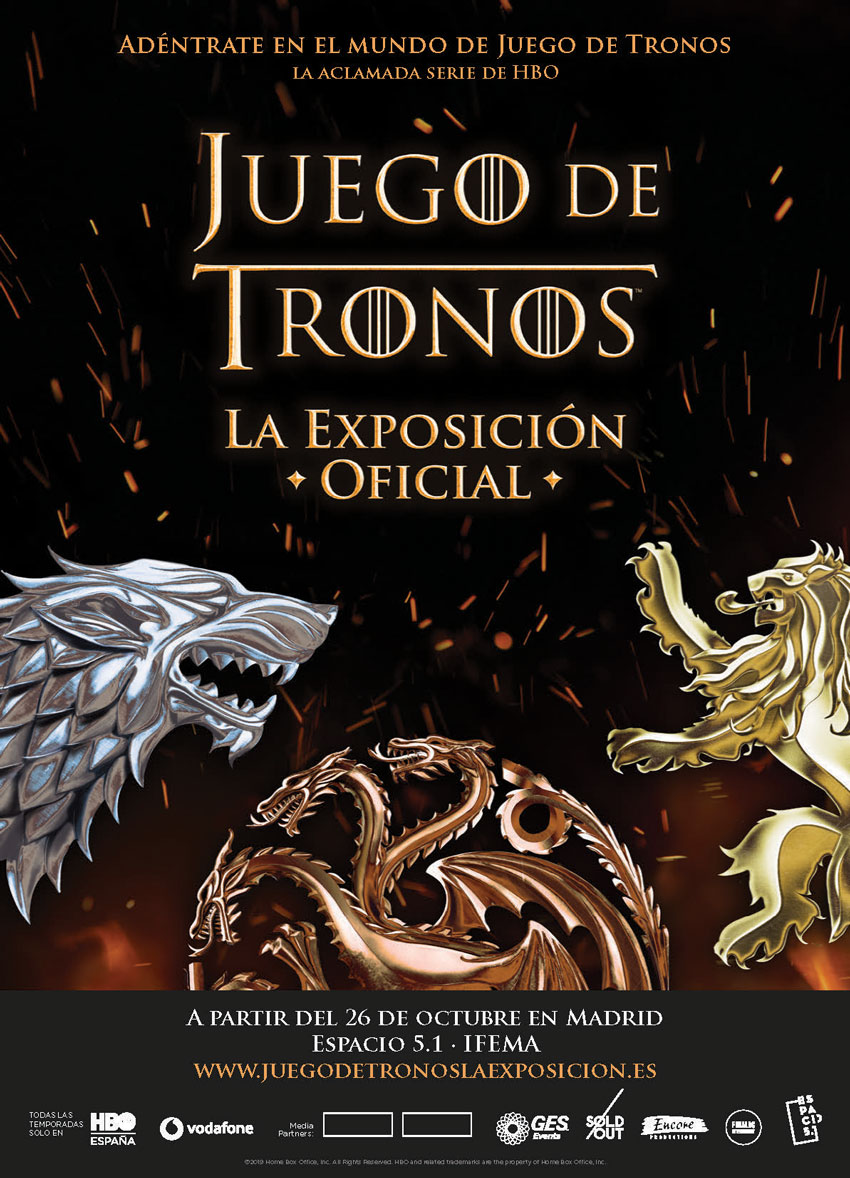 Madrid, October 24th, 2019 - JUEGO DE TRONOS: LA EXPOSICIÓN OFICIAL, finally arrives in Madrid, months after the breathtaking finale of the last season. The must-see exhibition offers fans an interactive and immersive GAME OF THRONES experience like no other. The exhibition will open starting this Saturday, October 26, for a limited run at Espacio 5.1 in IFEMA.

HBO® Licensing & Retail and GES Events in partnership with the local promoters Sold Out and Encore Productions, presents JUEGO DE TRONOS: LA EXPOSICIÓN OFICIAL, the biggest GAME OF THRONES exhibition ever shown in Spain. For the occasion, a new vignette showcasing members of the Stark family, has been added to the exhibition.

To celebrate the opening of JUEGO DE TRONOS: LA EXPOSICIÓN OFICIAL, Isaac Hempstead Wright and Liam Cunningham, better known as Bran Stark and Ser Davos Seaworth, and award-winning costume designer Michele Clapton from the GAME OF THRONES series, joined Jeff Peters from HBO® Licensing & Retail, Rafael Giménez from Sold Out, and Eduardo López Puertas General Director of IFEMA at a press conference this morning. Isaac Hempstead Wright, Liam Cunningham and Michele Clapton will be also be present tonight at the red carpet of the VIP opening.

Statement from Rafael Giménez: “Sold Out and our partner Encore, are very pleased to present in Madrid the biggest GAME OF THRONES exhibition to date in Spain, in cooperation with GES Events and HBO. We’re sure fans of the show will be thrilled to see all the costumes and props from their favorite TV show and it will draw to Madrid visitors from all over the country.”

The new interactive experience, with more than 1.400m2, inspired by the hit HBO series, will offer the visitors an up-close and personal look at authentic props, costumes and set decorations from the groundbreaking show, with an astounding 59 Emmy® Awards. Tickets to this blockbuster event are available at www.juegodetronoslaexposicion.es

JUEGO DE TRONOS: LA EXPOSICIÓN OFICIAL will allow fans worldwide to experience the craftsmanship and artistry of the GAME OF THRONES production up close in the largest public display in Spain to date. Featuring a unique mix of immersive environments, interactives, and multimedia content, visitors will experience the lands of Westeros and Essos and relive some of the most emblematic moments in the fighting for the Iron Throne.

The arrival of JUEGO DE TRONOS: LA EXPOSICIÓN OFICIAL is a new opportunity for Westeros fans to re-watch all seasons of the worldwide acclaimed show on Vodafone.

In November 2014 Encore Productions joined the Fimalac Entertainment Group to develop the exhibitions market in France and Europe: "The Art of the Brick” in Paris and Zurich, “Harry Potter” in Brussels (in partnership with Firestarter), in Madrid in 2017 and 2018 (in partnership with Sold Out) and in Milan in May 2018 (in partnership with Di&Gi and Sold Out), and Jurassic World the Exhibition at the Cité du Cinéma in Paris / Saint Denis from April 14th  to September 2nd 2018. Encore is very happy to present the iconic exhibition GAME OF THRONES: THE TOURING EXHIBITION at Paris Expo / Porte de Versailles in June 2018.

Since it opened its doors in 2018, Espacio 5.1 has hosted exhibitions as Jurassic World: The Exhibition, Banksy: Genius or Vandal, and The Pink Floyd Exhibition, receiving more than 350,000 visitors.